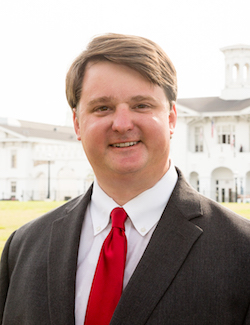 Adam assists individuals with estate planning and represents estates for the deceased in probate court. If you need a will, trust, power of attorney, durable power of attorney, living will or advance medical directive, Adam will be happy to help.

Adam was born in Mobile Alabama and grew up in the Oakleigh Garden Historic District. Adam attended St. Ignatius Catholic School in Mobile Alabama and then McGill-Toolen Catholic High School where he graduated in 2002. Adam earned his bachelor’s degree from the University of South Alabama in 2006. While at the University of South Alabama, Adam assisted disabled students by taking notes for them during their classes. During summer and winter breaks, Adam worked at Jarvis Plumbing Company which his family has owned and operated since 1954. Adam attended Loyola New Orleans College of Law where he received his Juris Doctor degree in 2010. During law school, Adam helped his family renovate several historic homes in the Oakleigh Garden District. Construction and small business have always been at Adam's core, and they are the reason why he is dedicated to zealous representation of contractors, trades people and other small businesses today.

After passing the bar exam and being admitted to the Alabama State Bar in 2010, Adam worked as a judicial law clerk for the Honorable Roderick (Rick) Stout. While working for Judge Stout, Adam helped schedule the civil court docket, review briefs and motions, analyze relevant case law and prepare orders. In 2012, Adam went to work at a private law firm in West Mobile where he represented contractors and small businesses, personal representatives of estates and individuals with insurance claims. Adam helped some of the smallest businesses in town prevail in litigation against global corporations. He opened and closed probate estates. He also defended contractors when projects ran into problems.

Adam lives in midtown Mobile with his wife, Amanda, their three daughters and one son. They enjoy visiting their local swim club, barbecuing in their back yard, cheering for the LSU Tigers and New Orleans Saints and canoeing on the Mobile-Tensaw River Delta in north Mobile and Baldwin Counties. Adam and his family are parishioners at St. Mary Parish on Lafayette Street in Mobile.

Contact Us
Practice Areas
Client Reviews
★★★★★
I serve as board chair of a Birmingham non-profit. Attorney Adam Jarvis was instrumental in our organization receiving an award of $1,375,655 in damages as a result of the Deepwater Horizon oil spill. He very skillfully dealt with several legal issues that could have resulted in denial of our claim. Lee
★★★★★
I recently worked with Adam at Jarvis Law firm to create an LLC for my speech therapy business. He took the time to create the LLC for me and more importantly, to answer all of my questions. He was courteous and thorough in explaining the process throughout. I would highly recommend Jarvis Law firm for any of your law needs! Rebecca Bowen
★★★★★
Adam Jarvis represented my company in a breach of contract suit against a multi-national manufacturer. His representation helped us win a hard fought case. Adam was there for me when I needed him. Stanley Small
View More
Submit a Law Firm Client Review